A quick note before we begin: this post makes a lot more sense if you know what to call the parts of an english bridle. Wikipedia has an excellent description, sadly without a picture.  In a swift Google search, I didn't come up with anything better.  Now, on to the post!

The primary objective of buckle free tack is to preserve the appearance of working buckles while eliminating the stress they can cause.  This is really only effective at Little Bits or smaller scales, but is almost necessary with Stablemate or micro mini models.  Working buckles come in two forms: tongue buckles or slip buckles.

In real life, of course, all buckles have tongues and the shape varies depending on the type of tack.  In the model world, slip buckles refers to buckles without tongues at all.  They are usually quite functional, though not quite realistic.  Tongue buckles are truer to life, but can be harder to handle.  In Stablemate scale, the majority of adjustable tack will have slip buckles.  The use of tongues on strap goods is so frustrating as to be worthless, though I have on occasion done it (see photo above!).  In addition to the frustrations of actual use, already thin leather is substantially weakened by the small holes necessary for adjustment.

I have found that there are several frustrations with slip buckles in Stablemate scale.  For one, they slip! It can be difficult to get things to stay put as you are adjusting them, especially if the leather slips all the way out of the buckle.  Another frustration is the necessary thinness of material that comes with scale.  Buckles made out of 32g wire (like the gold ones above) are prone to bending out of shape and in some cases coming loose entirely.  Repeated use of straps causes wear, and with already thin leather each use makes it more difficult to thread the leather back through the buckle.  With enough use, straps will eventually break.  Keepers, small loops of leather that keep excess length from flapping around on bridles, breastcollars, and virtually every form of strap good available, are often left off for convenience.  No one wants to mess with a keeper after spending 10 minutes getting a strap back through it's buckle.

The pro of adjustable strap goods is, of course, being able to adjust them to fit a variety of models.  In 2008, I was convinced that the sheer usefulness of adjustable tack outweighed the headaches it caused in the making and tacking up.  It was gently pointed out to me that tack with faux or fixed buckles was highly appreciated by customers and, in the long run, much easier to use and make.  I am a stubborn sort of person, but eventually I realized that they were right.

When you fix the buckles on a piece of tack, you must either leave it on the model permanently or find some other way of getting it on and off.  That particular piece of tack will (in most cases) fit that one model exclusively.  If you are lucky, there are other models similar in size and shape that can share.  Molds within a generation of stablemates will often be able to share tack, but not always.  The G3 cantering warmblood is almost identical to the jumping horse, but their forelocks are different sizes, so they can't share.

English bridles or bridles with a throatlatch and noseband require creative thinking.  The key thing is to hide the way you are securing the tack so convincingly that it takes a great deal of effort to locate it.  I have seen two primary methods used to accomplish this:

There are often some minor differences within each method, but that's the short of it.  In the first method, it can be difficult to get the noseband to sit correctly, especially if the stickywax isn't cooperating.  I've also found that it's not always easy to tuck the throatlatch up under the crown without something popping loose.  The chances of something slipping increase with each spot you have to stickywax, too.  I've used both of those methods, and eventually abandoned them for one of my own.

When I make a fixed bridle, I begin with the cavesson.  When completed, it's put on the horse and buckled down with a bit of glue near the actual buckle to hold it in place.  The cheekpieces and headstall are made next.  The crown of the bridle is glued to the top of the cavesson and everything is buckled and glued.  The browband is glued to the headstall at the proper place, with ends left loose to wrap around in just a minute.  Now that the bridle is finished, I make a careful cut on one side of the browband.  Here's a bad photo that makes a good illustration. 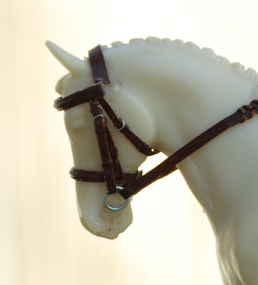 The stickywax wasn't cooperating that day, and the browband popped loose from it's spot.  You can see where I made the cut, though, and when everything is fastened down properly it's not easy to spot.  Unlike the other methods, there's only one spot to stickywax and you don't have to worry about ear rubs.

In some cases, going buckle free means literally that: no buckles.  English girths are an excellent example.  It's far easier to stickywax the girth under the saddle flap than fuss about with buckles, which usually add bulk.  I like to glue both ends of the girth under the flap and then split it across the middle so that it stickywaxes under the horse's belly.  This would never work on a Traditional or Classic model, and I would probably avoid it on a larger Stablemate and Little Bit models.  In most cases, Stablemates are low enough to the table that a judge would never notice.

Western cinches are the one place I retain working buckles.  It's true to the real piece of tack, can be accomplished in scale without excessive fear of damage, and isn't that hard to use.

I hope this has been informative, and that I haven't rambled too much.  Feel free to leave questions, and I'll do my best to answer.