Lots of people ask questions about my bridles.  I'm wrapping one up today for an english set that's really close to done (and will be on MH$P soon...maybe tomorrow).  I snapped some photos during creation, but this post is an overview of technique, not a tutorial or guide.

I didn't think about doing this until I was almost halfway done with the bridle, but you can see the cavesson in the back and the headstall in the front.  The caveson has been buckled, all straps glued down, and has all of the keepers (except for the one under the noseband) done.  At this point, short of being cut off, you're not going to remove it.  The headstall has the cheekpieces done, but the throatlatch is loose.  I haven't trimmed down the short end or added the buckle yet. 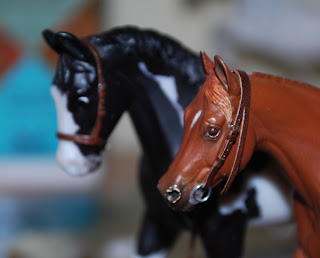 Here, I've placed the headstall over the caveson and glued across the crown.  That twisty bit of wire is a buckle that fell apart, whoops!  Some things are easier done OFF the horse, and today buckling the throatlatch was one of them. Fortunately I was able to salvage this piece, but sometimes a busted buckle means starting over on the crown and associated straps. 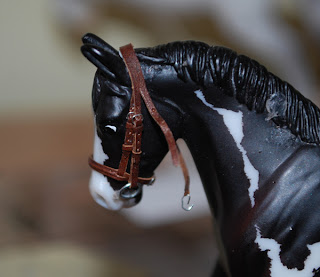 Now the browband is attached, glued to the headstall on both sides.  A small cut is made just above the top edge of the browband so that the bridle can be removed.  I trimmed some of the excess browband down and tucked it around the headstall, gluing it down.  Once the bridle was off, I replaced the broken buckle, fastened the throatlatch, and added any remaining keepers. 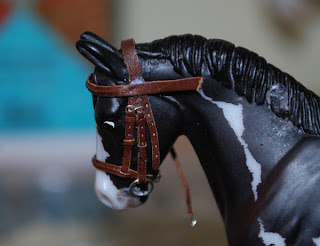 And here it is all done! I threw a protective coating of sealer (Tandy's Satin Sheen) on it and put it on Little Lonestar so that it would dry properly.  Sometimes the weight of the bit and other pieces causes the leather to twist as it dries.  I just wanted to make sure it would fit, too. There's a little tiny piece of the browband that wrapped around the headstall that needs to be trimmed up just below his ear, but that's an easy fix. 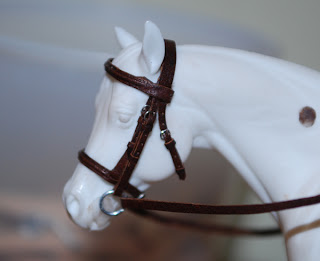 So there you go! That's the Cliff-Notes version of how I make bridles.

I'm sending out copies of the saddle guide in waves; if you emailed me and haven't received your copy yet, I just haven't reached your batch.
on Thursday, January 12, 2012